Dallas is the Top American City for Software Sellers 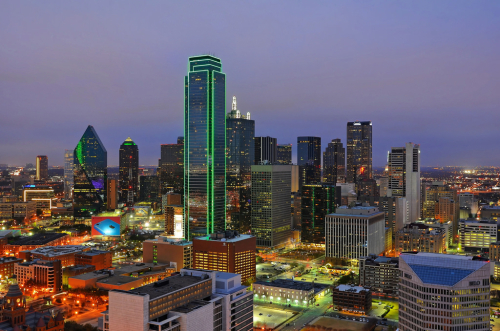 If you are a B2B software seller who wants to live in a metro area with plentiful career prospects, high quality of life, AND the opportunity to save for financial independence, then Dallas, TX is the city for you.

Surprised? I was surprised, too. I once worked for a software company based in Dallas, but I never realized how important the area is for technology sellers.

I’ll explain how I came to this momentous discovery, but first let me share the revelation that compelled me to research America's best cities for software sellers.

Work Should Lead to Financial Independence

I’ve worked around the world, from London to Melbourne to San Francisco. I loved those places, but looking back, I realize that I did not save money while I lived in those cities. My retirement savings are a small fraction of my total compensation over the last 20 years.

As a software seller in the middle of my career, I want to find a place that is awash in job opportunities AND allows me to save for financial independence – sooner rather than later.

I searched the Internet for a study of the best cities for my purposes, but nothing I found was specific or deep enough to answer my question. Not content to settle for oft-repeated conventional wisdom, I built an appropriate scale (the Preferability Index), mined for data (6 data points x 51 cities), and answered the question myself.

To find the best city for B2B software sellers, I started with the top 51 largest metro areas in the United States. (I included the 51st largest metro area, Rochester, NY, because I’m from upstate NY and I expected it to trounce at least a dozen larger areas, which it did.)

I collected six data points from each city, listed in the table below. I consider these six factors the key determinates to how successful, fulfilled, and secure I could become in any metro area, both today and down the road.

Six Factors of the Preferability Index

To build the Preferability Index, I considered all six factors equally important. I scaled the data so that the highest and lowest values within any single variable would differ by only one factor of magnitude.

This intentional scaling balances the influence of each variable, making them all roughly equal. This kept the index insensitive to small changes in any single variable. Scoring at the top (or bottom) in one or two factors was not enough to define a city’s spot on the Preferability Index.

How does the comparison work? It scores each metro area by combining the six factors as below:

I’ll explain each factor I considered, showing you the best and worst cities for each factor.

When cities tied for the same ranking within a single factor (like the 12 cities that tied for first place with a 0.0% marginal tax rate in E. Income Tax), I ranked them according to how well they performed in the overall Preferability Index (with all six factors combined).

I bet you’ll see some things you expect, and some you don’t. I hope you’ll get a feel for how these factors came together to rank the top American cities for software sellers.

First, I wanted to determine how much career opportunity existed in each area.

I performed a LinkedIN search for “sales” jobs in the “computer software” industry in the “United States” to identify where those opportunities are.

According to LinkedIn, the total open US sales jobs in the computer software industry was 63,857 on March 23, 2017. The top 51 US metro areas examined in this comparison accounted for 75.8% of those job postings.

This query captured any sales-related role. Most results were direct/indirect/inside sales roles, but some were in sales operations, sales training, consulting services, and even field marketing.

The exact number of sales jobs in each city wasn’t important. The relative levels of opportunity between cities was what mattered.

Notably the Dallas, TX query DID NOT include results from Fort Worth, TX. If had, it would have increased the Dallas lead (over #2 Austin, TX) by another 2 points on the index.

Of the 51 largest US metro areas, the cities accounting for the HIGHEST and LOWEST percentage of those open jobs were:

Second, I identified which metro areas pay the most. The higher the average compensation rate, the more money I could make.

Using figures from Salary.com and setting New York City as the index base = 1.000, the cities with the HIGHEST and LOWEST compensation rates were:

Third, I considered competition for job openings. The more likely I am to find employment quickly, the more secure my long-term income stream becomes.

Fourth, I compared the median cost of living expenses between cities. The lower the cost of living, the more money I could keep. This is important, since I want to reach financial independence in my lifetime.

Like with factor C. Compensation, I used comparisons from Salary.com. Setting New York City as the index base = 1.000, the cities with the LOWEST and HIGHEST costs of living expenses were:

Fifth, I tabulated the local municipal tax rates for a salary of $100,000, including both city and state income taxes. The lower the taxes, the more money I could keep.

This ranking uses standard marginal tax brackets. If you itemize deductions on your federal income taxes, then you may be to reduce your federal taxable income by the amount of your state income tax payments, so your actual tax rate could be lower.

Of the top 51 largest US metro areas, there were 12 cities tied for first place and six cities tied for second-to-last place. To determine the rankings for this factor, the cities are sub-sorted by their position on the overall Preferability Index.

Of the 51 largest US metro areas, the cities with the LOWEST and HIGHEST marginal tax rates were:

This last piece of data is the X factor that sharpened the lens through which I selected the best places to live, work, and save. Even without this factor, the top 10 cities stay ranked in the top 15 results, but their order and preferability changes.

There’s a big reason I included this factor: I wasn’t wholly satisfied with composition of the cost of living data. What you might not know about the Cost of Living indices you find on the Internet, is that they compare median factors, not equal ones.

Do some quick math and you’ll find that your rental dollar has 10 TIMES the purchasing power in Birmingham, AL over New York City. A Cost of Living index computes only a 5 TIMES difference. That’s a pretty big flaw in median-to-median comparisons.

I considered that difference too large to ignore. Including this sixth factor in the Preferability Index corrects for that flaw AND adds an important quality of life metric. With HIGHER purchasing power of living space, I could increase both my living comfort AND my disposable income (which I would save, not dispose of).

Of the 51 largest US metro areas, the cities with the LOWEST and HIGHEST median cost of rental living space, according to RentCafe.com and Trulia.com data sampled during March 2017, were:

Best US Cities for Software Sellers

After combining these factors into an overall Preferability Index (detailed earlier), the clear winner emerged: DALLAS, TEXAS is (by far) the top American city for software sellers.

The top cities in the Preferability Index were:

The average Preferability Index score was 26 and the median score was 18. Here’s how the entire field turned out (click to enlarge the chart): 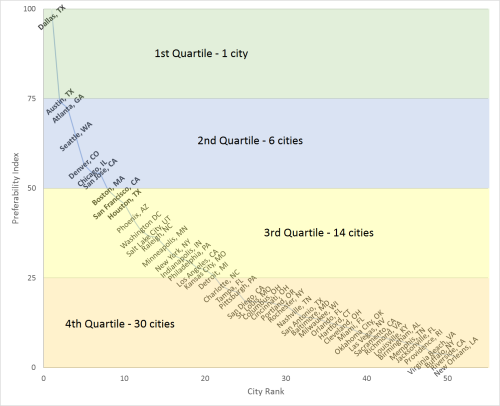 If you’re dead-set on living in a specific area of the country, here’s the Preferability Index showing the top metro areas for B2B software sellers in the Eastern US, Central US, and Western US. Click to expand the charts.

That's how I came to discover that Dallas, TX is the best US city for B2B software sales professionals who want plentiful career prospects, high quality of life, and the ability to save for financial independence.