Your Manager Has Your Number: Sales Metrics and the 80/20 Rule Most salespeople aren't successful. It's not that they don't generate enough revenue to pull their own weight (most do), but in the eyes of their management the majority aren't making the cut.

Only a handful of "stars" blow away their quotas and win an invitation to the company's sales club vacation year after year. Everyone else slaves away in the trenches unrecognized. Not exactly fair, right?

Maybe sales management draws an arbitrary line in the sand and your performance falls just the other side of it... or maybe it's more scientific than you think.

Your Boss Doesn't Think You Are Successful

More than likely, you're a victim of the Pareto Principle (not to be confused with the Peter Principle). You might have heard it referred to as "The 80/20 Rule." It's not exactly one of Newton's Laws of Physics, but it's applied almost as often.

Approximately 80% of outcomes are driven by 20% of causes.

Whether you know it or not, your management is probably using the Pareto Principle to analyze your sales performance alongside that of your peers. What they see is represented by the generalized chart below. 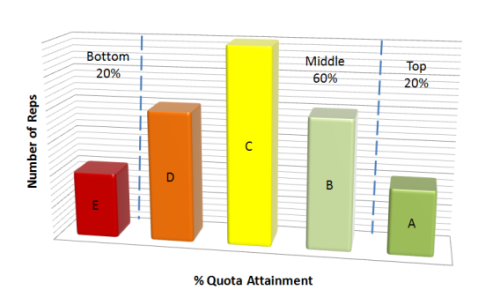 CHART: Sales performance grouping according to the Pareto Principle.

In testing parlance, this chart is divided into quintiles where each block represents one-fifth of the total variation in % Quota Attainment over a given period. Let's try an example to give this some real-world relevance:

If the lowest performing sales rep sold 35% of quota and the highest performing rep produced 150%, then the chart's x-axis would range from 35% to 150% of % Quota Attainment from left-to-right.

When divided into quintiles, the groupings become:

What do you notice about this? Two things stand out here:

This is what sales management is looking at. By this standard, the majority of sales people don't seem to be performing very well. If you've never fallen victim to being "graded on a curve," then welcome to the game.

Make The Pareto Principle Work For You

The news isn't all bad. There is a key takeaway to be garnered from the 80/20 Rule: if 20% of your efforts generate 80% of your results, then give yourself permission to focus more of your attention on that 20% whether it's 20% of accounts, relationships, territories, solutions, etc.

Bill Moore of the Grayson Group is a big proponent of the 80/20 Rule. In his Selling in Deep Carpet seminar, Moore advises salespeople to focus on High Value Targets (HVTs). These are the 20% of opportunities where you can gain the most leverage.

These HVTs could be generated by well-established relationships, new opportunities for cross-selling, an underutilized customer reference, or some other asset that will pay dividends if you develop it further.

Don't be a casualty of the Pareto Principle. Use the 80/20 Rule to your advantage and you might just enjoy that sales club vacation next year.

Have you ever been on the losing end of this chart? What caused it? What would improve for you if you could use this curve to your advantage?